Chimney Corner – While out on a road trip, we eventually found Chimney Corner Beach a few miles before Margaree Harbour along the Shore Road on the west coast of Cape Breton Island. With the help of Google Maps we were able to find roughly the whereabouts of this beach and take a chance that one particular dirt road would take us to this beach. 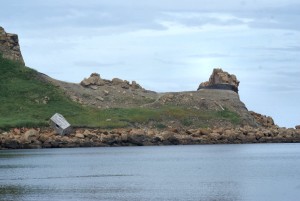 After driving only a couple of minutes on this dirt road, to our excitement we came to one of the most spectacular beach that Cape Breton has to offer!  At one end of the beach, there is a massive landmark column of rock named “The Chimney” after which Chimney Corner was named. From a bit of research  I learned that at one time the Chimney was a vertical square column of rock, but over the years, the Chimney leans more and more to the Northwest due to erosion and weathering. We spent a couple hours walking and exploring the beach and the rocky cliffs where we even found some fossils in the rocks. So glad we found this place…

Cape Breton Island is a small island on the northeast tip of Nova Scotia, Canada. No matter where you are on this picturesque island, no matter where you look, one will find a picture perfect occasion to capture a slice of Nova Scotia’s masterpiece.
So every Friday, come back to this page to find a new photo of that special little piece of Cape Breton Island. If you have a photo you would like to share with the world, please send it to capebretonliving@gmail.com.

Photo of the Week on the Cape Breton Living website has been sharing a new photo every week on Fridays since 2001. You’ll find below, most of the past Photos of the Week that we had the pleasure to post every Friday. Every photo deserve the chance to be viewed over and over again and not to be stashed in a dark vault. So please check out the past photos links below,

Links to past Photos of the Week:

Would you like to support the
Cape Breton Living website?
It would help with the costs of
hosting and running this site,
so we can keep on showing off
this awesome island to the
rest of the world.